As soda ash price in China remains high, buyers are looking into alternatives. Meanwhile, Turkey is expected to double its annual production to over 5 million tonnes by end of 2019, providing sufficient supply to the market. As such, Turkish production is expected to replace China in a long-term as favourable market condition continues for Turkey. Soda ash, also known as sodium carbonate(Na2CO3), is an alkali chemical that is widely used from home to industry. It is essential to understand the nature of soda ash in order to identify potential demand and supply from the market.

There are two grades of soda ash; ‘light-grade’ and ‘dense-grade’. They are identical in terms of chemical composition, where the only difference is their granule size. Light-grade is a fine powder form of soda ash, mainly used to manufacture other chemicals, where dense-grade is widely used for glass production. Soda ash production can be categorized into two types of processes; synthetic process and natural process.

It is relatively straightforward for natural process; trona ore or nahcolite is utilized as the only material to produce soda ash.

Supply: Tight in China, More to Come from Turkey Unlike the U.S. or Turkey where soda ashes are produced mostly from natural process, China produces soda ashes through synthetic processes; 48% from Solvay process, and 45% from Hou process.

In China, soda ash production increased over time, recording highest production of 26.8 million tonnes by the end of 2017. However, the growth rate is to face limits as the Ministry of Environmental Protection(MEP) in China urged local authorities to take action on severe air pollution. Some soda ash producers are now under pressure to reduce their production rate, and some had to close down their production unit. 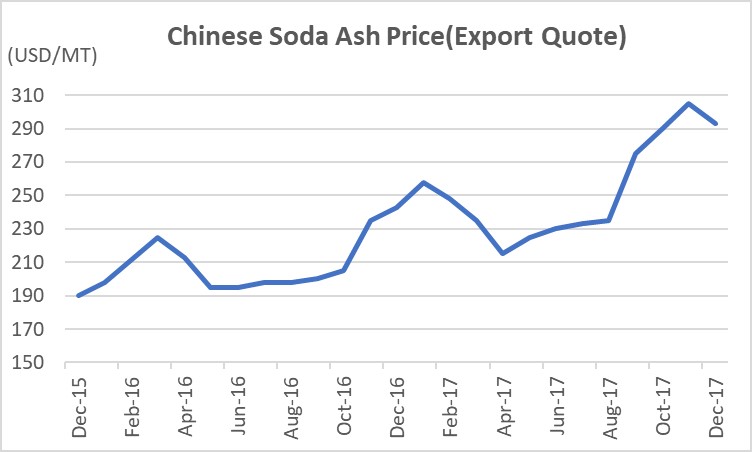 With concerns on tight supply, Chinese soda ash price surged by 54% in 2 years. While major soda ash producers in provinces such as Hubei had to shut down their production unit, monthly soda ash production in China dropped by 14.1% in May 2018, from the production amount in end 2017.

It is notable that while major soda ash producers are slowing down their rate of production or even cutting down the amount, Turkey has increased its production by 10% year-on-year in 2017. Most significant usage of soda ash is in production of glass, which makes the soda ash market highly dependent on demand for glass products. Major usage of glass is in producing glass containers, where most end-users are consumers. Flat glass is also a key driver for glass consumption as it is used in building facades, windows, automobiles, doors, solar panels, and others. Thus, it is important to comprehend the market condition in consumer, construction, and automobile industry in order to identify demands for soda ash.

The outlook for glass container industry stays positive with strong demand for alcoholic beverages and cosmetics, reaching global consumption of USD 55 billion in 2016. The market is further backed by a recent rise in global environmental awareness. Glass containers are irreplaceable due to their chemical stability, reusability, and non-permeability. Southeast Asian countries contributed towards glass container market, accounting for 10% of global consumption. Emerging market in Asia plays an important role in demand for flat glass. Backed by economic growth, construction market in major Asian countries grew along over the last decade, especially in China and India. Both nations have more than doubled the amount of annual GVA (Gross Value Added) in constructions over the last decade, showing evidence of strong support for the flat glass industry.

Particularly in China, automotive uses also played a great role in flat glass usage. Automotive glass consumption in China is expected to rise by 2-3% year-on-year in 2018, supported by growth in middle-class spending power. However, due to recent environmental control in China, engine vehicles are now taxed at a standard rate of 10%, up from 7.5% in 2017, demotivating new purchases. Still, long-term demand for flat glass in automobile industry stays positive with growing interest of hybrid-power and electric cars, further backed by tax exemptions.

Soda ash is a basic manufacturing agent to many chemicals. In chemical manufacturing, soda ash is the main source of sodium ion, which is required in the production of sodium silicates, sodium phosphates, and sodium bicarbonates (baking soda). These chemicals are used in most of the areas in the global economy from food to fire extinguishers. Some governments and associations release soda ash production data as a measure of economic health.

Where to Source for Soda Ash?

However, there are remaining supply-side uncertainties associated with environmental practice in China. The pressure to shut down or reduce the rate of production caused a surge in soda ash price in China. Not only the tight supply is threatening Chinese soda ash industry but increasing production cost further added adversity to the market. The production cost of natural process has a significant advantage over synthetic processes due to its nature of raw materials. In particular, the environmental practice in China not only increased the price of soda ash but the price for other raw materials needed for the production. For instance, ammonia price in China increased by 26.9% over the last 6 months, as of February 2018. As continued adverse market condition in Chinese soda ash industry is not expected to improve within foreseeable future, buyers are looking for the alternatives to Chinese soda ash.