Juhee Yoon
Share This Story
A sign of decreasing trade in global coconut oil market is being witnessed. Imports to the U.S., the major importer of coconut oil, dropped by 30,000 tonnes in 2017. The end of superfood fad led to lower consumption of coconut oil as food. With expectation of stable production, exporting countries are shifting the focus to domestic industrial use. Still, it is expected that the dwindling usage as food is to outpace that of increasing industrial usage. With expectation on lower demand, price plunge seems inevitable even in a long-run.

Coconut oil is edible vegetable oil extracted from dried kernel, or copra, of coconut fruit. Then it undergoes heating and filtering to be refined for commercial use. Coconut oil has industrial uses as biodiesel or engine lubricants. Its derivatives are also applied to herbicide or soap manufacturing.

USDA estimates the world coconut oil production to be 3.54 million tonnes for MY 2017/18. Over the decade, the production volume has remained rather stagnant, from 3.3 to 3.6 million tonnes. Weather conditions attribute to small fluctuations.

A major concern with the production is the age of coconut palm trees. While the typical lifespan of coconut tree ranges from 60 to 80 years, the production peaks around 10 to 30 years after it is planted. According to Indonesian Coconut Board, however, more than half the Indonesia’s palms are over 50 years old, most being planted soon after World War II. Yet most of the Indonesian smallholders are unconcerned by the issue and not interested in making investments for higher yield.

To resolve the issue, more producers are planting hybrids coconut trees with higher yield. Dwarf coconut, for instance, takes only 3 years to first bear its fruit, in contrast to 7 years for a native variety and produces up to 200 fruits a year with similar cost. The trend of planting hybrids, strongly promoted by governments, is to offset factors negative to production to keep the production quantity steady.

In contrast to the steady production, less coconut oil is being traded globally. In MY 2017/2018, total global import of coconut oil was at 1.5 million tonnes, down from 1.82 million tonnes in MY 2014/15. USDA projects further decrease next year to 1.46 million tonnes.

There is a noticeable trend with coconut oil consumption in the U.S., the largest coconut oil importer. The annual consumption dropped by 25% in 3 years to mark 427,000 tonnes in 2017. Press releases that denounce coconut oil benefits were the main cause of the change. 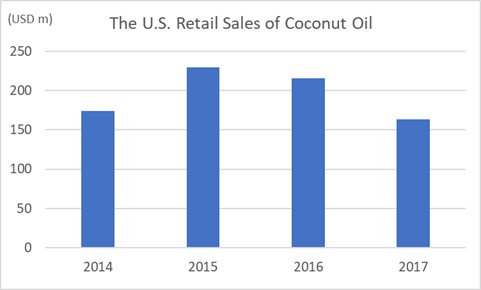 Coconut oil popularity skyrocketed since the beginning of 2014. The enthusiasm was backed by celebrities who testified to their daily use of coconut oil for beauty purposes. In the U.S., retail sales for coconut oil peaked in 2015, at record USD 229.3 million. However, the sales is now down 30% to USD 163 million as of 2017.

Coconut oil began to lose its reputation as superfood as more scientists asserted many of the so-called benefits of coconut oil are unsubstantiated or extrapolated poorly. The collapse of coconut oil fad led to a decrease in global consumption. By next year, coconut oil export is projected to shrink by 11% from 3 years ago, whereas the exports of its substitutes such as palm oil, soybean oil and sunflower oil are projected to grow by 9.2%, 37% and 55% respectively.

Coconut oil market is now making a shift to domestic industrial use as myths on coconut oil is debunked. In the Philippines, the government is promoting the use of coco methyl ester for its various advantages. According to a study conducted by the Philippines Coconut Authority, 1% of coco methyl ester blend not only showed reduction of smoke emission by approximately 50% but also increased the vehicle mileage per litre by 17%.

In the Philippines, an annual growth rate of 5% is expected for fuel use, driven by the economy and population growth. According to USDA, the nation’s coco methyl ester blend use has almost doubled over the past decade, whereas the blend rate showed almost no change, from 2.4% to 2.6%. The figure is to increase as the Philippines Department of Energy announced its target blend rate - 10% by 2020 and 20% by 2030 - capacity use of 30-40% will rise accordingly to meet the demand.

The Philippines Coconut Authority has been demanding for increase in coco methyl ester content in biodiesel from 2% to 5%. However, the expensive price of coco methyl ester in comparison to diesel prevented such change. As of May 2017, the price difference was up to USD 1.12 per litre, where coco methyl ester price at high-end was roughly triple the diesel price. An economic study in 2016 predicted the change to 5% blend rate will result in USD 61 million loss.

Nonetheless, USDA projects the industrial use of coconut oil in the Philippines to increase by 5.3% in two years. The Philippines government is expected to take action that will raise the domestic demand to compensate for the falling coconut oil price in the global market.

For now, the commercial use of coconut oil is happening exclusively in the Philippines. Palm oil preoccupied the biofuel market in other Southeast Asian countries including Indonesia, Thailand and Malaysia, where palm oil of 7 to 20% must be blended in biodiesel sold in the market. While recent studies suggest the possibility of utilizing coco methyl ester in major producers of coconut oil, there is no evidence that hints immediate policy change to adopt coco methyl ester.