Ricardo Lopes
Share This Story
Global Olive Oil production is forecasted at 3,179,000 MT hitting four years low and with the growing consumption, it will dry the reserves. The downward price trend observed in the last 3 years will make a positive turn for producers. The EU is the biggest producer and with the strong demand and recovery of its productions, expects trade volumes to achieve 1 million MT by 2030.

The global olive oil production for MY 2020/21 is forecasted at 3,179,000 MT which is 0.3% lower than the provisional data for MY2019/20 and also the lowest since MY 2016/17. The biggest reductions are expected in Tunisia, Italy, Portugal, and Algeria. The decrease in the overall production volume is due to the lack of rains during key fruit growing periods, the off-year of many large production areas, and the lack of improvement in agronomic practices. The largest reduction is from Tunisia with an expected production of 120,000 MT which is a YoY reduction of 66%, followed by a 30% decrease from Italy. This decrease is mainly in the Italian biggest producing region of Puglia that is responsible for more than half of the country’s production, and which was affected by hail storms, flash floods during the summer months, and also by cases of Xytella fastidiosa. Portugal and Algeria expect a reduction of 29% with the production of 100,000 MT and 89,500 MT respectively of olive oil.

Evolution Rate of Olive Oil Production with base 1958/59 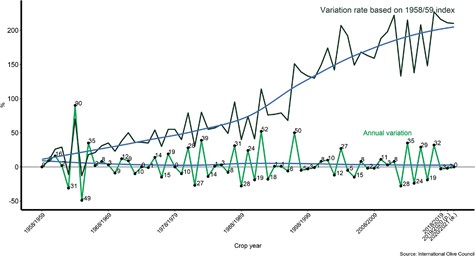 Decreases in productions are cushioned by Spanish and Moroccan good year

Although there were significant decreases in some countries, the total production from the EU will have an increase of 16% with the production at 2,232,800 MT. The main responsible for the increase is the bumper crop from Spain that expects production of 1,596,100 MT of olive oil which is a 42% increase compared to the previous MY and the fourth biggest production on record. Another significant increase will come from Morocco which is expected to have the second-largest production with 160,000 MT. This increase is due to the on-year of production in Morocco and also due to recent investments in the renewal of the olive groves.

The EU production and trade forecast by 2030

Although the global prospect for MY 2020/21 is the lowest in four years, according to the European Commission, the production of olive oils in the EU shall have an annual growth of around 1.3% until 2030. The stable growth is supported by investments in the development of new cultivars and cultivation technologies in intensive and superintensive systems, renewals of olive groves, and growth in the planted area. 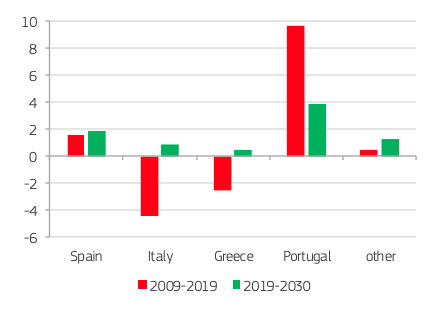 The global increase in consumers’ interest in healthier foods, Mediterranean cuisine, and a general rise in incomes especially in China, South-East Asia, and Russia will positively push the exports of olive oils from the EU. Given the current pandemic situation, a slow recovery is expected initially but with the possibility of a 5% annual growth in trades, achieving 1 million MT in trade volumes by 2030. 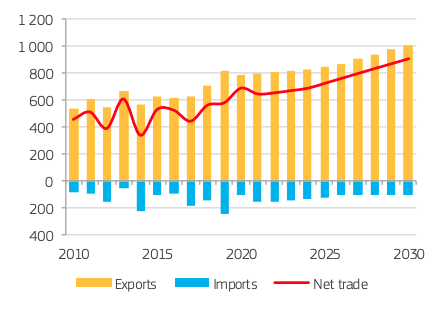 The growing consumption of olive oil estimated for 2021 is 3.14 million MT and it is expected to finally outpace the production. And with news of slightly smaller production for this MY for the aforementioned reasons will finally push up price trends that have been downward for some years. The upward trend has already initiated in November 2020 which saw an increase of about 11% for the Extra virgin olive oil compared to the same period of the previous year. This jump in prices is observed for the purest and highest quality as its production has been limited by unfavorable weather conditions faced by major producing regions.