Soybean MealLegumesArgentinaRefined Soybean OilBangladesh
Jul 6, 2018
Written by
EL
Eunjee Lee
Share This Story
With ongoing dispute between the U.S. and China, global soybean trade is left with two questions: Will China find alternative suppliers? and will the U.S find alternative buyers?
The answer is right here, at Tridge.

The U.S.-China trade war started as the U.S. announced import tariff on Chinese steel and aluminium on 9 March 2018. As a result, the Chinese government announced higher tariff (25%) on imported goods from the U.S. which takes effect on 6 July. The increased tariff will initially be imposed to U.S. goods such as soybeans, wheat, corn, pork, rice, and other products. According to USDA, in 2017 agricultural exports from the U.S. to China valued at USD 20 billion where soybean accounted for almost 60%. 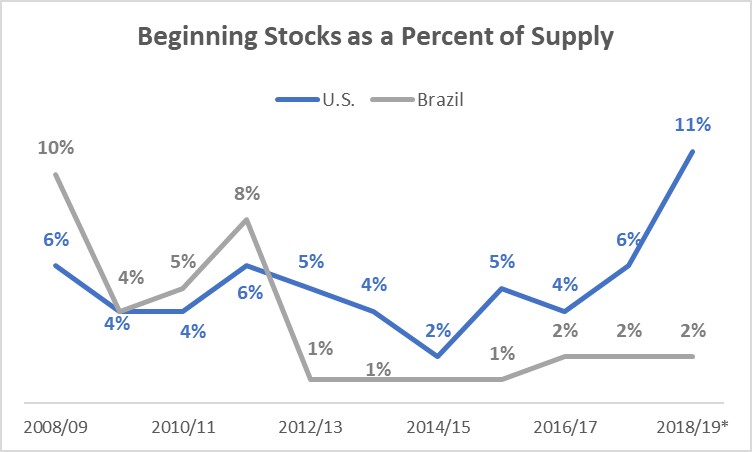 As fears arose with buying of the U.S. shipments, Chinese buyers are looking into alternatives for the U.S. soybeans. Due to geographical proximity, demand for Brazil’s soybean rose, doubling the Brazilian soybean premium. Brazil is currently close to its minimum stock level, giving fewer stocks for export.

The unfavourable price and insufficient supply for Brazilian soybean leave China nothing but two options to consider; importing U.S. soybeans indirectly or to source elsewhere, but either way, the cost is expected to burden Chinese buyers.

Alternative Latin American countries for Brazil are Argentina and Paraguay, considering the general production volume. However, due to heavy drought this year, soybean production in Argentina dropped by 30% this year, leaving no spare stocks for China. In the other hand, Paraguay is expected to top Argentine production this year, as the nation is expected to produce 6.5 million tonnes this year.

India is the fourth largest producer of soybean where over 60% of the nation’s soybean exports were destined to the U.S. in 2017. Some portion of this can possibly be replaced by China considering the current overflow of supply in the U.S.

The five Asian countries can also benefit from re-exporting U.S. soybeans to China, providing Chinese buyer at a reduced rate over the direct import from the U.S.

Russian soybean acreage is growing due to the large availability of untapped arable land. Growing export demand encouraged farmers to grow more, which supported increased soybean production by tenfold since 2000. USDA projects Russia to increase soybean production by 7.5% in MY 2018/2019, to 3.9 million tonnes.

Will the U.S. Find Alternative Buyers?

Before identifying the potential buyer, we need to understand how soybeans are consumed worldwide. Most significant uses are in animal feed, accounting for over 70% of total usage, followed by human consumption(18%), biodiesel(6%), and industrial uses(2%). Soybean is mostly processed into a form of SBM(soybean meal), and SBO(soybean oil).

Two possible approaches can be made regarding SBM and SBO trade; directly finding the U.S. SBM/SBO manufacturers to export to overseas end-buyers, or to find the U.S. soybean supplier to connect with overseas soybean crushers.

A rise in global demand for SBM is witnessed, especially in developing Southeast Asian countries such as Vietnam, Indonesia, Thailand, and the Philippines. In Europe, the Netherlands and France are the largest importers of soybean and SBM. However, for European countries, non-GMO SBM accounts for 75% of total feed grade market.

Vietnam is a rising importer of both of soybean and SBM, as domestic supply is decreasing due to a growing number of farmers switching to more profitable crops. According to GSO, Vietnam is expected to experience 18% drop in soybean production this year. Despite the rising demand for animal feed and human consumption, soybean production is projected to drop further with declining crop area. Soybean import to Vietnam is further backed by increased capacity of domestic soybean crushing(a.k.a. processing) industry, where the annual crush capacity is expected to reach 1.35 million tonnes by MY 2018/2019. Argentina is the major import origin for Vietnam, accounting for 87% of imports as of 2016. With Argentina facing insufficient supply of soybeans from drought and higher demand from China, the U.S. can be a potential replacement.

The similar approaches can be made to the SBO industry. The soybean or SBO supplies from Latin American countries can potentially be replaced with the U.S. supplies. Major importer of SBO is India, followed by Bangladesh, Algeria, and Egypt. South Korea is also within top 10 SBO consuming countries.

In Bangladesh, poor soil and competing crops limits cultivated area for soybeans. As such, the nation imports soybeans for crushing and the demand for imported soybeans increase every year. In MY 2018/2019, the nation is expected to increase the soybean imports by 10%. The government of Bangladesh revised its import tariff structure in FY 2017/2018 to support local crushing industry, giving more space for overseas soybean to enter into the market.

Soybean sourcing is becoming more difficult with ongoing tension between the U.S. and China. Global soybean trade is undergoing a seismic change, leaving both buyers and suppliers in a difficult situation. Tridge provides advice and makes suggestions for buyers and suppliers on what might be the best option regarding the current market condition. Through our distinctive network of world-wide scope local agents, we identify the most competitive condition customised for every buyer and supplier.